January -The Before Times

Way back in June of 1978 a request was made to the Inter-
Lutheran Commission on Church Development to consider new
ministry development in the Sunnyside-Clackamas area. At that
time the ELCA did not exist but over the next 9 years the three

In September, 1986 a local area planning session was held at Milwaukie
Lutheran Church to address the idea of creating a new congregation in
the Clackamas area. Rev. Paul Swanson had suggested that the location of
an approx. 4 acre site across the street from Sunnyside Elementary School
would be a good location for a church.

In December, 1986 the site at 132nd and Sunnyside, a former filbert orchard,
was purchased .

As the year leading up to the first worship service of our church in December
1987 progressed, the synod began looking for a Mission Developer Pastor to
start working on creation of a new faith community in the Sunnyside area. At
that time Sunnyside was a two-lane country road surrounded by small plots
of farm land. The rapid development of the area was many years away.
The land at 132nd and Sunnyside Road, which was a filbert orchard for many
years, had been purchased by the synod for the site of a new Lutheran

church. At the same time, nationally, the ALC, LCA and ELC were in the pro-
cess of combining forces to become the ELCA.

Now that the land was purchased, the synod began a search for a pastor who
wanted to start a church ‘from scratch’. This is a daunting task, as you can
imagine and it takes a special set of gifts to be a Mission Developer.
May

In 1987, the Synod was searching for a Pastor-Developer as they purchased land for
a new Lutheran church on Sunnyside Road. They also purchased a parish home on
the corner of SE 126th and Ashley to house the new pastor and his family.
Pastor David Hungerford was called to begin mission development in spring of 1987.
He developed a brochure and arranged to move down from Lyndon, Washington
where he had been serving. Creator Lutheran Church was beginning to take shape.

Creator’s Land and the Edward Ott Barn to the east. Our land belonged to Edward
Ott who also owned the general store and Mill on the opposite corner (now the cake
store, clothing store and Gloriaz) 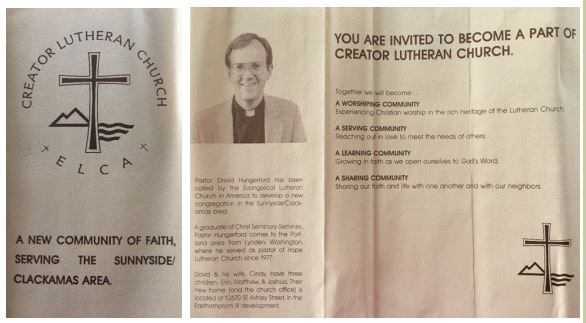